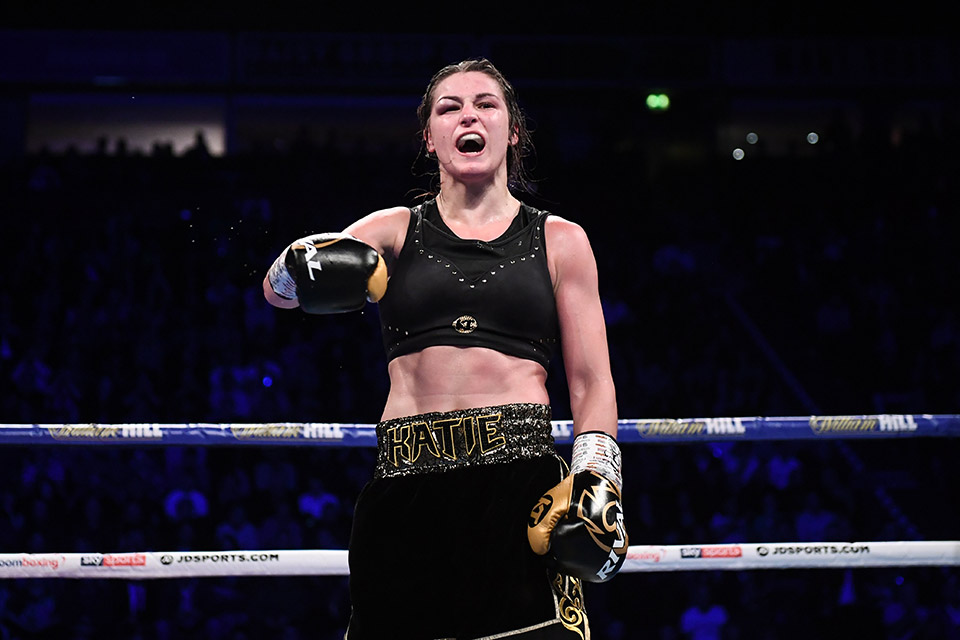 Irish boxing star and undisputed lightweight champion Katie Taylor normally isn’t much for interviews, preferring to stay quiet outside the ring, but these are extraordinary times, and fans out there are wondering what fighters are up to right now with the sport on hold.

Taylor (15-0, 6 KO) checked in with promoter Eddie Hearn live on Instagram earlier, and immediately poked fun at how rare it is for her to do something like this.

“This is my favorite part about being a professional boxer,” she joked.

As for what the 33-year-old has been up to recently, she says the quarantine period hasn’t really been a huge change for her daily life, as she tends to stay in and keep to herself most of the time, anyway, but she is clear that she’s kept on working as best she can. She was scheduled to face Amanda Serrano in a big fight on May 2, which has now been moved to July 4.

“I’ve been out here the last two months training, but this is a time for me to just kind of work on a few things,” Taylor said. “It’s not the time for anyone to take their foot off the gas. It’s going to pay off for the fighters who are working. You can turn this into a positive. I’m gonna be one of the fighters [coming back] who was disciplined and ready.”

Serrano (38-1-1, 28 KO) has bounced around the weight classes over the years, collecting a lot of title belts. The 31-year-old Puerto Rican from Brooklyn also might be the best puncher in women’s boxing, pound-for-pound, and Taylor notes the differences between she and her opponent.

“She obviously does an awful lot of talk, but i don’t get involved in anything like that. I just focus on my actual training,” Taylor said.

As for the fight, “This is literally the best fighting the best, these are the fights everyone wants to see. It’s a very exciting fight, not just for women’s boxing but boxing as a whole. It’s dangerous for both of us, but it’s also career-changing for both of us. Whoever wins is going to be cemented as the No. 1 pound-for-pound in women’s boxing.”

That last point might be debated by some, including long-reigning, undisputed welterweight champion Cecilia Braekhus, who will be facing Jessica McCaskill at some point in her next fight. Taylor has fought McCaskill, and Braekhus has often been mentioned as a possible opponent.

“I’d imagine Cecilia will outbox Jessica,” Taylor offered. “But it’s a huge fight and Jessica has a big punch. Who knows what can happen there?”

“I want to be involved in the biggest fights,” Katie said. “I obviously can’t look past Amanda right now, but if it does come through, the fight with Braekhus is a history-making fight, undisputed champ against undisputed champ. When has that even happened before?”

Weight could be a concern, and Hearn noted that Braekhus is fighting McCaskill at a catchweight of 145, as McCaskill is moving up and Braekhus obviously has designs on a big money bout with Taylor, who says a catchweight would be the way to go.

Taylor also gave her thoughts on another Matchroom fighter, the 23-year-old Terri Harper, who took the WBC 130-pound title from veteran Eva Wahlstrom on Feb. 8 with a very impressive performance. Harper is building some real buzz in the United Kingdom, and will face Natasha Jonas in a title defense next time out.

“I think she’s been brilliant, and she’s so young, as well,” Taylor said of Harper. “She’s only going to get better and better for the next few years. What a great ambassador for the sport, and she’s willing to fight everyone.

“Her and Natasha Jonas is a great domestic fight. I don’t think Natasha has shown her best as a pro. I know how good she can be, because I’ve fought her. Maybe this is a fight where she really turns up.”

Haney wants big fights now, feels he should be reinstated as WBC titleholder